skip to main | skip to sidebar

Take me out to the Ball Game

My friend and co-worker got tickets to Thursday's Red Sox game again the Detriot Tigers.  She asked if I would go with her.  Sure!

Neither of us are die hard fans but we were looking forward to just having a Night Out!  We had drinks after work, then we walked to the train station.  We took the T into Boston.  It was so long since I had been on the Boston subway system I didn't even know what the toll to get on wasy anymore.  $2.00, yikes,  I can remember it being 70 cents to go into town.  I think the last time i took the train is was $1.25.  Anyway...

We walked from Kenmore square and it was nice trying to find spots we use to frequent in our "Engergetic Pre-Maritals Days"  We could not find any of them.  Not the dance clubs or the food places.  Everything has changed.

We walked around Yankee Way and could not find out gate or the big gift shop I had remembered.  We were on the wrong street.  then we were on Yankee Way and got to not only meet but also get a singed autograph from a retired Red Sox player.  We were so excited!  By the time the game ended neither of us could remember his name.  (my daughter had to tell me who he was later from the photo we got) Just goes to show what Red Sox fans we are not.

We find our gate and head in.  Naomi spots a sign from far away and gets excited.  She practically runs over to this stand.  I am thinking "what? Does she know the guy behind the counter?  What's the Big Deal?"  The sign she read said "GLUTEN FREE"  She was so excited to find hot dogs, buns, BEER, cookies and brownies being sold that were all gluten free.  I think she would have jumped over the counter and hugged the guy she was so excited.  Then to top this all off, the guy actually carded her.  What the start of great night!.

With some assistance, we found our seats, they were pretty decent. Right along the first base line.  We were a little crowded with our seats being in the middle of the section and one way to get in and out of the row.  (with my claustrophobia I was a little uneasy about that)

The game begins...
Out Catcher, sabtwmacchia, or something like that, gets a HOME RUN!!! Yes!!!   By the third inning we are both on our cell phones, texting, facebooking, taking some random photos.

Ya, big fans.  By 5 inning we go for a walk, check out what there is for food and drinks.  Lines were wicked.  Heading back to our seats, I notice there is a whole row practically empty down  just maybe 10 - 12 rows up from the field.  We ask and people near by confirm they have been empty so now we are even closer.  Oohh!  Someone started the WAVE, what its coming, ah, it died.  They try again and again and it finally reached us.  Wow, it went around three times.

Inning 6, we both kinda say to each other,  "I don't mind if ya wanna leave.  Don't feel like we have to stay til the end if you are getting tired or anything?"

Time to call in the reserves.  I call my husband and he rescued us.  He and my daughter drove into town to pick us up right outside Fenway and we got a ride back home. 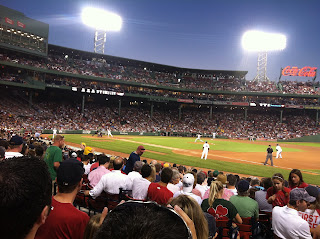 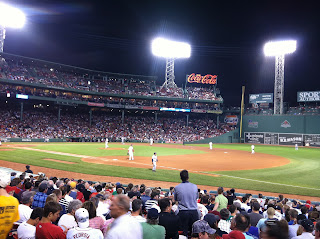